Hills has shared details of a new traffic management plan in relation to its two sites at Lower Compton and Sands Farm in Calne which comes into effect on 03 February 2020.
31 January 2020

Hills Waste Solutions has entered into contracts to provide four of the five lots for waste management services to Wiltshire Council.
03 August 2017

With the help of residents from across Wiltshire, Hills Waste Solutions has now diverted two million tonnes of the county’s household waste away from landfill.
17 February 2017

Funding from The Hills Group for village and community halls reached the significant £1 million mark this month with the latest grant made to the Stanton St Quintin Parish Hall project.
19 December 2016

Waste crime is a massive issue in the UK and, according to the Environmental Services Association (ESA), the trade association for the nation’s resource and waste management industry, it costs the country £550million a year in clean-up costs and lost tax revenue.>>
12 December 2016

A Wiltshire rugby club is now home to upgraded changing facilities thanks to a £10,000 donation from The Hills Group.>>
25 November 2016

Hills Waste Solutions, the Swindon-based waste management and recycling company, has expanded its operations into the Bristol and Bath area with the acquisition of Able Waste Management Limited.>>
07 November 2016

A Royal Wotton Bassett woman says she is ‘so grateful’ to the recycling team who rescued her phone – containing thousands of photos of her son growing up – after she accidentally threw it away.>>
10 October 2016

Families are being urged not to bin old school uniforms ahead of the new term, but to recycle them instead and help to raise much-needed funds for the life-saving work of the Wiltshire Air Ambulance (WAA).>>
30 August 2016

Green fingers given chance to blossom at Corsham Primary School

Pupils at Corsham Primary School will be able to get their hands dirty with a range of horticulture projects after winning a competition to show the best way of using compost in a school garden. >>
26 July 2016

The Hills Group has committed to conducting its business in a transparent and ethical manner with the introduction of a Responsible Purchasing Policy. >>
20 July 2016

From 8 – 14 May schools across Wiltshire are being offered the chance to get their hands on some free compost as Hills Waste Solutions celebrate Compost Awareness Week (CAW). >>
3 May 2016

Invitations to enter this year’s CPRE Wiltshire Best Kept Village Competition, sponsored again by the Hills Group, have been sent to all parish clerks in Wiltshire. >>
3 March 2016

Hills Waste Solutions has teamed up with Wiltshire Wildlife Trust through the Recycle for Wiltshire partnership to help deliver recycling and waste reduction messages to children in Westbury. >>
15 February 2016

Issue 07 of our SAFER FOR ALL newsletter is out now... 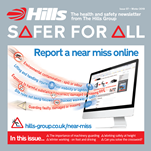 Find out more about our 26 year old partnership with WWT >>>

Please note that at least one General Waste container is required - we will add this into the quote you receive if you don't include one in your quote request.